Dissolved oxygen is a known, but not widely monitored parameter of the brewing industry. However, as of 2016, the parameter has been gaining interest from the craft brewers of Australia. Oxygen can assist in brewing efficiency, while simultaneously expose brews to adverse effects. Here at Hanna we have seen firsthand how our customers have used oxygen monitoring to improve the brewing process. Below are 3 of the key reasons to build dissolved oxygen testing into your brewing process.

Many brewers steep grains to enhance the flavour and colour of beer. Steeping is the process of exposing grains to water and heating to agitate the growing barley. During (or prior to) this process, it is critical that the barley be exposed to an oxygen rich environment to survive. Oxygen presence helps to remove carbon dioxide and bring in fresh oxygen exposing the colour and flavour steeping aids to provide.

Fermentation is the process by which yeast converts the glucose in the wort to ethyl alcohol and carbon dioxide gas giving beer its alcohol content and carbonation. Oxygen is necessary in this process for yeast to consume and synthesise sterols and unsaturated fatty acids which enable the yeast to convert the sugar. Because the wort has very low levels of oxygen, most breweries oxygenate their wort prior to pitching yeast during the transfer process after or during cooling.

Depending upon the specific gravity of the wort, and the alcohol yield you are after, the amount of oxygen required varies. The recommended ranges are the following:

3. Post Fermentation – Oxygen Will Have Adverse Effects on Finished Product

After fermentation, green beer should be nearly free from dissolved oxygen as it can lead to a higher chance of oxidation throughout the remaining brewing process which affects flavour, aroma, and the stability of beer.  It is important to ensure that all of the oxygen is consumed during fermentation to prevent this. To measure DO at this stage in the brewing process requires a system which can measure in parts per billion (PPB). 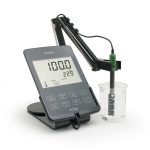